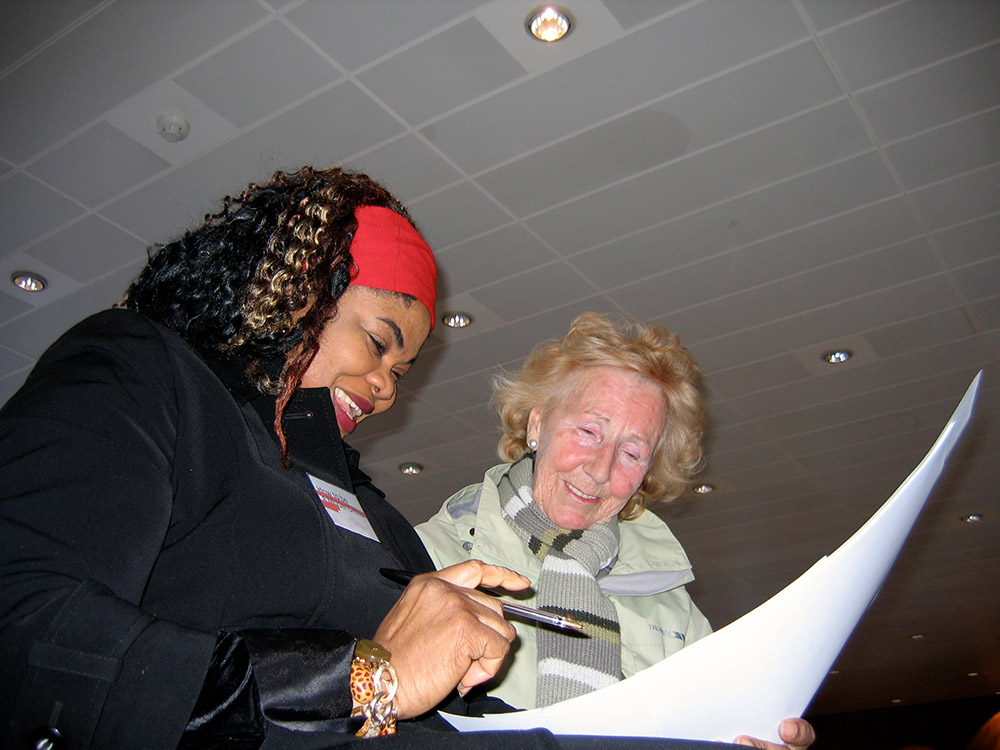 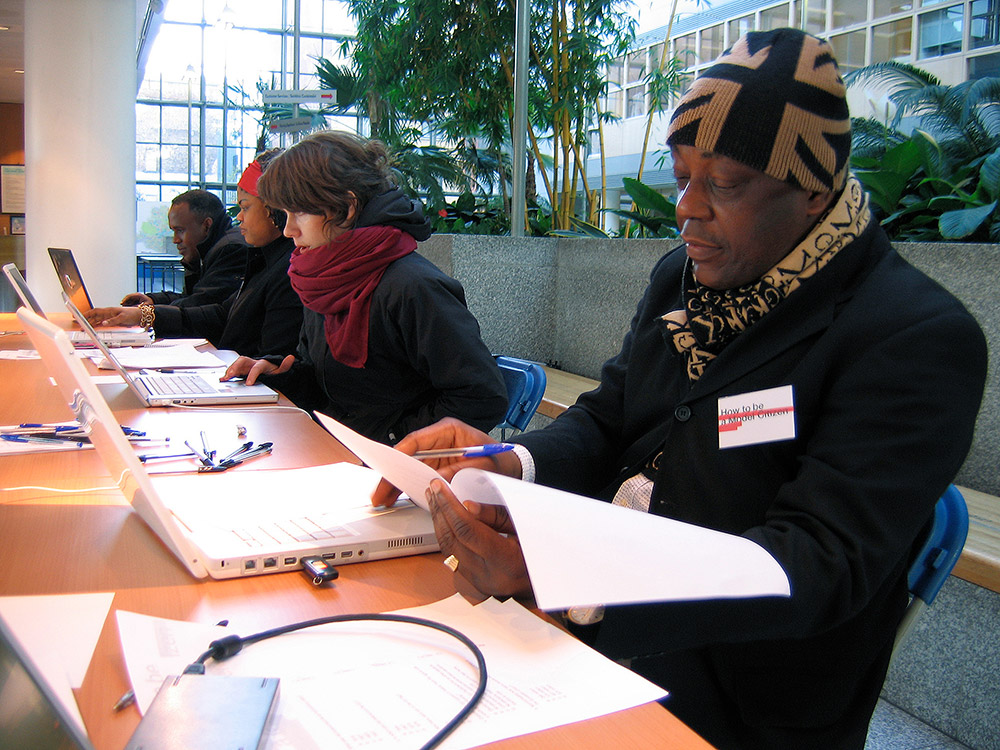 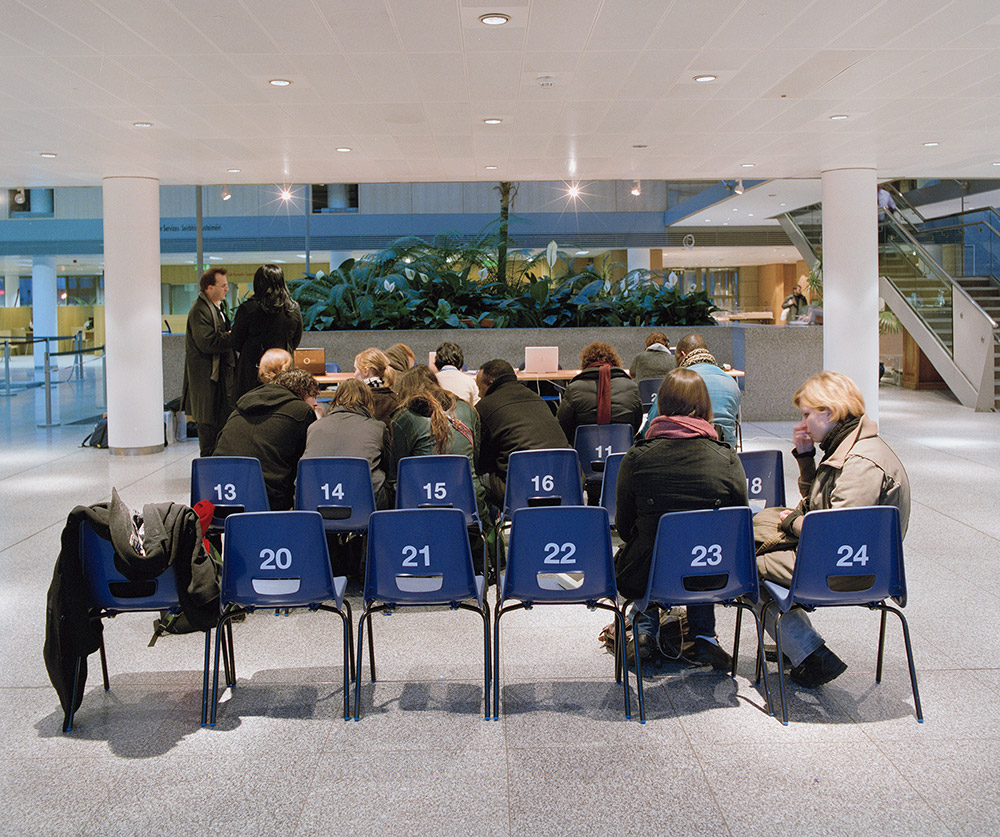 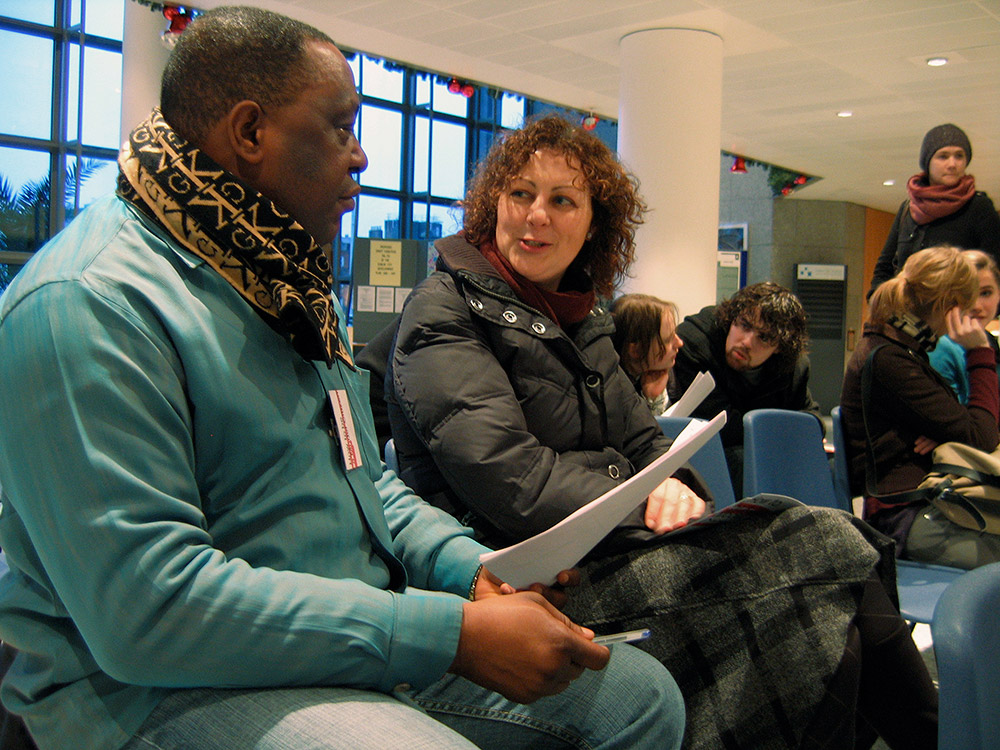 HOW TO BE A MODEL CITIZEN

not simply […] a matter of our being able to accept the other, but of being in his place, and this means to imagine and make oneself other for oneself.
Julia Kristeva (1993)

How to be a Model Citizen was first performed in the Atrium of Dublin City Council Civic Offices in 2009, where the artist and four co-collaborators, who were at various stages of negotiating citizenship in Ireland, facilitated it.

The installation is recognizable to anybody who has spent time in Social Security Offices, Passport Offices, Immigration Offices and similar institutional environments. Visitors are invited to take a seat in the waiting room, where they will meet an official who will supervise a short multiple-choice examination, modeled on citizenship tests from around the world. The questions will test knowledge of democratic institutions and civic society in Ireland. On completion of the test the official will inform participants if they have passed the test or not and begin a conversation.

Migrant receiving countries such as Australia, the US and the UK have increasingly adopted citizenship tests. In 2008 the Minister of Justice announced that Ireland would adopt a similar test for immigrants to prove their language skills and knowledge of ‘national culture’ before being allowed permanent residency.

The audience was situated within a transformative dialogical process; drawing from Rancière’s statement that, ‘critical art intends to raise consciousness of the mechanisms of domination in order to turn the spectator into a conscious agent in the transformation of the world’ (2004: 83). By situating the spectator in close proximity to the position of the migrant subject a temporal shift in power relations occurs. The spectator was faced with the dilemma discussed earlier, and described by Kristeva as ‘not simply… a matter of our being able to accept the other, but of being in his place, and this means to imagine and make oneself other for oneself’ (Kristeva in Browne 2009: 96-97).[1] The paradoxical question posed in this intervention, how to be a model citizen? poses a duality: a marginalized migrant wishing to be fully accepted by the host society and at the same time a demonstration of how a political (art) intervention can invite participation; an act of ‘political citizenship’.